Mary Clay Boland’s Love of Great Acting Got Her Dream Jobs in Theatre, Television and Film

After spending an internship year at Circle Repertory Theatre, Mary Clay Boland was positive that she wanted to become a professional casting director.

Mary Clay Boland:  When my year was up, I sent out my resume diligently. And I was lucky enough to get hired by Lynn Kressel Casting – who, at that time, was only casting

one Law and Order because only one existed, believe it or not.  And she also worked on, she does all the Hallmark Hall of Fame movies; and basically, she did Universal Television.

I worked there for a couple of months as an assistant sort of on all the projects; and that was quite different from the theatre that I had just been working in.  So, that was sort of a jarring experience.  I learned a lot, but it definitely made me think I may want to stick with theatre.

I left TV and went back in to theatre for another year working for a casting director in New York, Stephanie Klapper, and did cast tons of theatre. And then got an opportunity to work with a company called Walken/Jaffe Casting, which was Georgianne Walken (who’s Christopher Walken’s wife) and Sheila Jaffe. And they had just cast this little pilot

called The Sopranos, that they did not think would get picked up. And it did end up getting picked up on HBO.

And I also cast about six other pilots with them, and then several movies; and then ended up being a casting associate for the first two seasons of The Sopranos, which was, you know, once again, we cast the entire first season of The Sopranos before any of it had aired because that’s how HBO and cable does it, but that was new.

HBO had Sex and the City, but it was not popular.  It had just come out, so it had not become the phenomenon that it did. And a lot of people were sort of like “What’s this?” “I don’t get this.” “They’re doing a movie called Analyze This, that’s basically the same thing about, you know, a mobster that goes to…” [a psychiatrist]

And so no one really knew what it was. And so we had to really get creative in our casting. And then the difference between that and the second season was comical. Because once it aired and became, you know, still some people think the best show on television.  It really was quite different.  We had people calling us, begging to do the show, whereas before we were sort of, you know, and begging others.

Susan Dansby:  ‘Please, please let your actor come in and read for us for this part.’ And the agents are saying, ‘Yeah, but what’s in it for my actor?’

Mary Clay Boland:  Exactly.  Because at that time, HBO did not have a lot of money to spend on day players, and guest spots.  And they didn’t have the reputation for their original programming. Now, any actor would kill to do an HBO series.  So yeah, that was a huge learning experience.  And just that company was so great because they had so many connections in the business.

I was able to work with, Phillip Noyce, who has directed Angelina Jolie in Salt.  He did a pilot for us.

I also cast a play for Signature Theatre, got to work closely with Arthur Miller, and cast American Clock – which was very interesting because that’s Arthur’s childhood really.  He was very shy about admitting that he was the lead character in that play.

But when you’re casting it, it’s very intimidating when he’s in the producer sessions and you are trying to cast a teenage version of himself. But he was phenomenal to work with.  I just lucked out my first few years in New York, and just was able to work with some of the best directors and casting directors there are.

Susan Dansby:  Well, it sounds to me like it was more than luck – that you brought a lot of enthusiasm to it; and because you were looking at that as your final path as opposed to just a way in, people saw that, responded to it, and hired you because of that. 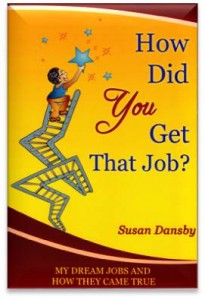 Mary Clay Boland:  I must say I’m a total dork in that I get chills when I watch actors bring a scene to life.  You know, you read scripts and you visualize it and you have all these images in your head and then when someone comes in the room and surprises you or really even just brings through exactly how you pictured it, it gives you chills. I love being able to be around when those first moments come to life.  So yeah, I am kind of a dork, I kind of love it and I do have a lot of enthusiasm for casting.

Susan Dansby has received four Emmy® Awards and two Writers Guild Awards for her work on the soap opera, AS THE WORLD TURNS. She is the author of HOW DID YOU GET THAT JOB? MY DREAM JOBS AND HOW THEY CAME TRUE.
View all posts by Susan Dansby →
This entry was posted in Dream Jobs, Film Jobs, Interviews, Television Jobs, Theater Jobs and tagged Arthur Miller, casting director, Circle Repertory Theatre, get a job, HBO, How Did You Get That Job?, Law & Order, Lynn Kressel Casting, Mary Clay Boland, Susan Dansby, The American Clock, The Sopranos, Walken/Jaffe Casting. Bookmark the permalink.