Since ATWT, Eric Sheffer Stevens Has Been a Poetry Prof, an Uptight Upper-Upper and More

Caught up with actor, Eric Sheffer Stevens. He dropped me a quick line, and he’s been very busy since Reid bit the dust: 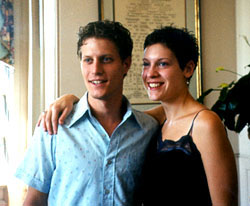 Eric and his wife (Jenny Sheffer Stevens) did Much Ado About Nothing with the Vermont Shakespeare Company in August.

He shot a film in September called Lefty Loosey, Righty Tighty — a small indie that was shot in Brooklyn. “I loved doing it. I played a rather pitiful, divorced poetry prof that was having a difficult time getting his act together.”

For more info on the film (and a look at the film’s trailer), go to: http://www.leftylooseymovie.com/home.html.

“I did an episode of the ABC episodic Body of Proof, Dana Delany’s new show, in October. I played an uptight, upper crust, upper East Side type.” Body of Proof premieres Tuesday, March 29, 2011. Check out the trailer here: http://www.youtube.com/watch?v=uam5imBLAOE.

“At the end of October, I started shooting a film called The Silent House. It’s by the couple [Chris Kentis and Laura Lau] that wrote and directed Open Water, about the divers that were left behind. This is their next film. Three of us go into a house, and it doesn’t go well. Horror genre. Lot of fun to do. We wrapped that mid-November.”

But wait. There’s more. “Shot a John Hancock commercial two weeks ago. Who knows when that will air? Hopefully it does, and a bunch…”

And what’s Eric doing next? “I’ll head out to LA in mid-January for what used to be pilot season, and bounce around there getting more and more depressed, until I come back to NY six weeks later.”

Here’s wishing Eric and family a prosperous pilot season, and more great roles for us to check out in the new year.

Susan Dansby has received four Emmy® Awards and two Writers Guild Awards for her work on the soap opera, AS THE WORLD TURNS. She is the author of HOW DID YOU GET THAT JOB? MY DREAM JOBS AND HOW THEY CAME TRUE.
View all posts by Susan Dansby →
This entry was posted in Dream Jobs, Film Jobs, Theater Jobs and tagged actor, As the World Turns, ATWT, Body of Proof, Chris Kentis, Dana Delany, Eric Sheffer Stevens, How Did You Get That Job?, Jenny Sheffer Stevens, Laura Lau, Lefty Loosey Righty Tighty, LuRe, soap opera, soaps, Susan Dansby, The Silent House. Bookmark the permalink.