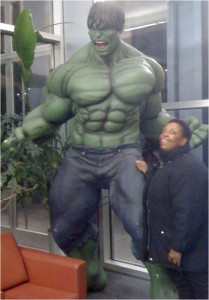 Enter the lobby, and you’re thrust into a fantasyland populated by game/instruction consoles and mammoth action figures. This design concept is found throughout faculty offices, and student project workrooms – even the ladies’ room foyer has a black light!

I’d been brought in to give a seminar on “How to Get Your Dream Job,” where I covered tips on everything from how to network with

alumni to the importance of thank you notes.

Little did I know I’d have so much to be thankful for after spending just 2½ days in this remarkable learning facility.

Thank you to Director of Creative Services and faculty member, Shirley Saldamarco, who spearheaded my visit and introduced me to many remarkable students and inspiring staff members.

Thank you to Anita who greeted me, and revealed the newest addition to the ETC action figures: the Incredible Hulk. The Hulk now lives in the lobby because he’s too big to fit anywhere else. 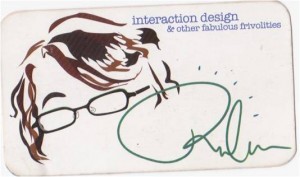 Thank you to those who attended my seminar – with a special shout-out to student Rebecca Grabman. I mentioned in passing that my first business card included a caricature, so does hers. Check it out on PineappleGirl.net.

The next day, I had one-on-ones with students. While the ETC program is structured, it also allows students to pursue individual goals that speak to their personal talents, skills and interests.

Consequently, the conversations were quite diverse: Sherry Chow, filmmaker/concert violinist, chatted with me about job interviews; Michael Capristo and I delved into the process of becoming a professional television writer; Christine Barnes wanted feedback on her Project Manager website; and Solip Park wanted tips on how to be even more helpful to the young people she’s mentoring online. I want to thank each and every one of them for their questions, and for telling me a little bit about what they’re doing. 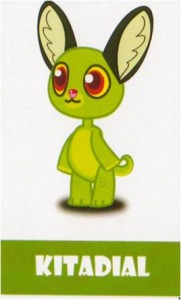 From there, I was introduced to one project team. (Each ETC student participates in several project teams during their course of study.) This group was working on a project for Bayer – an online game (with offline elements like cards) developed for kids with Type 1 diabetes. The “Crechur” team (Sam Collier (artist), Xioa Lan (programmer), Goutham Dindukurthi (programmer) and Brent Elmer (producer/designer)) allowed me to pick out my Crechur, Kitadial. They showed me how he moves, what he eats, and what he’ll look like as he grows. Thank you so much, Crechur team! I love games, and yours is delightful.

On the way to a staff lunch, I got a chance to visit with Associate Executive Producer, Mk Haley. We talked about interview trends – did you know only 1% of job applicants send thank you notes? Those applicants have no idea how many jobs they’re losing because of that oversight.

Special thanks to Drew Davidson, Ph.D. (Director). Drew told me about the Adventure Module where the students experience first-hand things like white water rafting so they can have a point of reference from which to “bottle” feelings like exhilaration, wonder and spectacle into their own projects.

Faculty member Chris Klug and I connected as he explained how he used the soap writing model to do a project with writers who were in different locations.

From there, I met with Shirley’s Producer class where we discussed the intricacies of being your own person while allowing others to bring their creativity into play.

The next day, I’d been invited by Ralph Vituccio, to attend his Visual Story class.  Teams were presenting five-minute films that they’d designed around elements drawn out of a hat. Their picks would determine a location, emotion, object, and color featured in the film. I thoroughly enjoyed seeing these films which ranged in style and tone from adversarial Legos to torture by rubber chicken. Thank you, film teams, for allowing me to be part of your audience.

The final thank you? That’s got to go to Executive Producer, Don Marinelli. Don, thanks for letting me join your adventurers at the ETC for a couple of days. It was a blast. 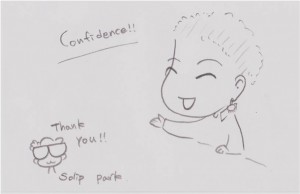 To my mind, this is the way to train for the dream jobs of tomorrow: Embracing your skills, experiencing the joy and stress of collaborating in teams, being challenged to think beyond what’s possible, and having fun each step of the way. What could be dreamier than that?

Susan Dansby has received four Emmy® Awards and two Writers Guild Awards for her work on the soap opera, AS THE WORLD TURNS. She is the author of HOW DID YOU GET THAT JOB? MY DREAM JOBS AND HOW THEY CAME TRUE.
View all posts by Susan Dansby →
This entry was posted in Dream Jobs, Job Search Tips and tagged Carnegie Mellon University, Chris Klug, Christine Barnes, Don Marinelli, Drew Davidson Ph.D., Entertainment Technology Center, ETC, How Did You Get That Job?, Michael Capristo, Mk Haley, Ralph Vituccio, Randy Pausch, Rebecca Grabman, Sherry Chow, Shirley Saldamarco, Solip Park, Susan Dansby. Bookmark the permalink.