Actor Ellen Dolan (Margo Hughes, As the World Turns) talks about the surprising gifts that came from acting on the soap opera. She also reveals plans for an upcoming independent film project.

Susan Dansby: Well, let’s talk about what’s next for you. So you’re going to be making a movie?

Ellen Dolan: I am going to be in a movie back home in Iowa. Coming full circle.

A director of ours years ago, Larry Carpenter, who’s now on One Life to Live, was working out in Iowa. And these people contacted him because they had gone to college with me, and done musicals with me. And they said, ‘Let’s get Ellen, now that she’s off-contract.’ And it happened to be the right script at the right time. And they sent it to me, and I loved it.

Susan Dansby: And what’s the name of the movie again?

Susan Dansby: So don’t even think about it.

Ellen Dolan: Don’t even ask. Pay your own parking. Just show up, put on your lipstick and talk. But it’s a really lovely little story. And when I film it, and it’s coming out, I will talk to you again.

Susan Dansby: I would love that. Absolutely love that. And I thank you so much for talking to me today. And I wish you the best. It has been my honor and privilege to write for you and Scott all these years.

Ellen Dolan: Oh boy, it was sure tough there towards the end. But we did it. And you know, honestly, it was time to go. It really was time to go. But, I’ll tell you, I was floored at how emotional I was the last day. Absolutely floored. I look awful in every single picture. And I look like my grandmother, Mary Alice. Not even the cute grandma. The really just not-cute grandma.

Susan Dansby: I know it’s hard after all these years to come away with just one thing. But kind of what’s the takeaway from your time at As the World Turns? Your years of Margo? 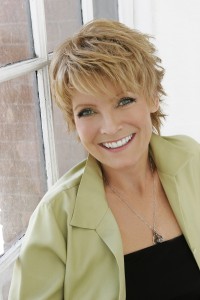 Ellen Dolan: See, now, that makes me cry. The takeaway is that I’ve got a really easy cry trigger. I keep telling people, I’m unemployed now, and all I know how to do is memorize lines and cry on cue. And I’m not so good at memorizing lines. I’m just left as emotional baggage.

I was blessed. It provided me a really incredibly lovely life. The highlight of which – can you imagine an actor who makes no money going out and deliberately having a family?

I had a family. I have a beautiful little girl. I never would have been able to do that if I’d been a regular USDA choice actor. I landed in a lovely little spot where I could go to work and play every day.

Susan Dansby has received four Emmy® Awards and two Writers Guild Awards for her work on the soap opera, AS THE WORLD TURNS. She is the author of HOW DID YOU GET THAT JOB? MY DREAM JOBS AND HOW THEY CAME TRUE.
View all posts by Susan Dansby →
This entry was posted in Dream Jobs, Film Jobs, Interviews, Television Jobs and tagged actor, As the World Turns, ATWT, career change, Ellen Dolan, How Did You Get That Job? dream job, informational interview, Larry Carpenter, Margo Hughes, soap opera, soaps, Susan Dansby. Bookmark the permalink.