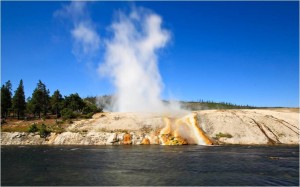 My first job after college was in Yellowstone Park. It was a perfect example of taking the job you’re offered instead of the job you want – what I really wanted to do was direct theater.

But since I needed money, and probably would have spent that summer answering phones and taking dictation in Atlanta, I was thrilled to be personnel rep in Mammoth Hot Springs, WY. Gorgeous place! (By the way, Yellowstone and other national parks provide wonderful summer jobs. Go here for more information: http://www.yellowstonejobs.com/Seasonal-Positions-7522.html)

One of my responsibilities was to greet new and returning employees as they arrived at my location. I would make name tags for them, introduce them to their supervisors and guide them to their dorms. And once their contracts were over, or if they quit or were fired, I processed them out.

But as of the first groups of employees arrived, a returning kitchen help employee took one look at me and frowned. “Where’s Ellen?”

Ellen had been personnel rep for the past two summers. And although the young woman in front of me was brusque (a “hello” would have been nice), it seemed like a reasonable question.

“Ellen’s a tour guide this year,” I said, smiling.

“Who are you?” the girl demanded.

This girl was downright rude! But I remembered how Ellen (who trained me) had emphasized that some of these employees were as young as 16, and this was their first time away from home. Be patient. Be friendly.

I forced a patient smile and turned on the friendly.

The girl narrowed her eyes, looked me up and down and crossed her arms, obviously annoyed, “How did you get that job?”

Now, I’m a black woman from Georgia. Even at age 22, I’d had a few run-ins with prejudice. And since I knew for a fact I was one of three African-American employees working in Yellowstone at that point, this was starting to sound a whole lot like prejudice to me.

This girl had taken one look at me and assumed I wasn’t qualified for this job. But I was trying to give her the benefit of the doubt.

“This is my second year working here, and I wanted a supervisor position, and they wouldn’t give me one. And this is your first year here, right?”

“Ellen got her own room. Do you get your own room?”

Now the rest of the new and returning employees were starting to stare. Uncomfortable, I cleared my throat. “Yes, I have my own room. Now, if you’ll all follow me…”

This girl was so snarky, I wanted to cuss her out. Instead, I replied quietly (which, if she knew me, she’d know was the tipoff that I was ready to blow).

“Well, the way I got this job is: I have a Bachelor of Fine Arts degree from Carnegie Mellon University. Have you graduated from college yet?”

She remained resentful, but had nothing else to say.

Lessons Earned: If I were put in that position today, I wouldn’t get so defensive. Here I was, thinking it was a “black” thing, when this young woman was actually going through a “you’ve-got-your-own-room” thing.

And, even with the benefit of her example, I’ve made the same mistake she made – been so blinded by what seemed to be an injustice, that I didn’t stop to think about what I really wanted – and that there might be a better way to get it than spouting off attitude.

I’ll be forever grateful to that young woman for showing me how painful it is to settle for less than what you think you deserve, and for giving me a wonderful title for my book.

And wherever she is, I hope she’s got a dream job – and her own room.

Susan Dansby has received four Emmy® Awards and two Writers Guild Awards for her work on the soap opera, AS THE WORLD TURNS. She is the author of HOW DID YOU GET THAT JOB? MY DREAM JOBS AND HOW THEY CAME TRUE.
View all posts by Susan Dansby →
This entry was posted in Dream Jobs, Job Search Tips and tagged career advice, Carnegie Mellon University, dream job, dream jobs, Mammoth Hot Springs, summer jobs, teen jobs, Yellowstone National Park. Bookmark the permalink.