Susan Dansby: Tell us about your favorite acting role. 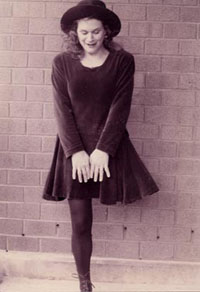 When I got the job, the producer and the director and I talked and I said, “You know, why don’t we just have me, au naturel, as a three- legged cat?” A cat who’s gone out there in the world and lost her leg and came back and everybody is kind of freaked out and then, she sings this song about ‘if you touch me, you’ll understand what happiness is.’ And it brings in a whole new meaning when this cat has been through life and nobody should feel sorry for her.

The other favorite of mine is a role that I got a Helen Hayes award nomination for down in Washington. And that was a world premiere musical called The Fifth Season in which I played a dance hall girl who is running away from a boyfriend who shot her in the leg. And by the second act she loses her leg – she has to have her leg amputated out in the wilderness. She’s a homesteader and she’s trying to get some land of her own; and the women around her have to help her lose her leg because of the gunshot wound. 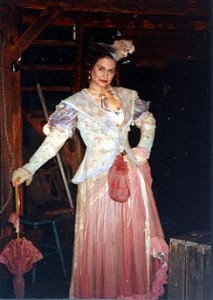 So in the first act, I’m dancing on the bar top, and I’m singing, and I’m doing all this stuff. And then, in the second act, I have one leg. And audiences debated in the lobby how they did the one-legged thing because the actress couldn’t have one leg because she danced in the first act and we all saw both legs. So they must be covering it somehow. How did they do that? Because there was a big fight scene and everything with me with one leg; and people couldn’t figure out where I was hiding my other leg. But the funny thing about that was how I got that job.

Susan Dansby: Yes, how did you get that job?

Anita Hollander: It’s one of my favorite stories because I had sung many times at [New York University] for the musical theater writers, where they bring in professional singers and actors to present the project that the writers are working on. And these two women, a composer and a lyricist, had had me come in and sing some stuff with Cass Morgan – another wonderful musical theatre person.

Then, a couple of years went by, and I got a phone call from these two people – this composer and lyricist team – who said, “We’d love you to do a reading of our new musical. It’s going to be down in Maryland (I live in New York City). So we’d bring you down if you’re interested. You know, you’re just so perfect, we’d like you to do this and it’s this wonderful story of the dance hall girl who gets shot, and she runs away from Oklahoma to go to South Dakota, and she loses her leg. It’s an extraordinary true story of the West.

I said, “This is great!” And I said, “Do you want me to take my leg off in the second half of the reading?” (It was staged reading.) And there was silence – total silence on the phone line. And I thought, “Oh, what did I do, what did I do?” I said, “Are you guys, okay?” And they said, “You know what, can we get back to you, can we just call you back in a few minutes?” Then, they hung up and I thought, “Oh, what did I do?” And they called me back a few minutes later and said, “Anita we didn’t know you had one leg. We just knew that your voice was the voice we remembered as the perfect voice. You’ve got this big bold voice. We loved your voice, then. We would like to have it now. And we had no idea that you had one leg. And we hope you’re not offended, because that’s not why we called you.”

And I said, “Are you kidding? How many roles are actually that perfect for me to have two legs in the first act, and one leg in the second, and to sing and to act?” I said, “You couldn’t have given me a greater compliment.” And then, I did the reading down in Maryland. And then, they chose the piece to do at the Olney Theatre – also in Maryland – about a year after that. And the funny thing was they made me audition again for the role.

And when I walked out of the room, the musical director said to the director and the casting director, and the producer, “Why are we sitting here talking about this? She is the perfect person for this role. There is no discussion. We need to cast this woman and stop talking about it.” And they all agreed that well, of course it’s perfect. If the role is an amputee who can sing and dance and act, and we have an amputee actress who can sing and dance and act sitting in our room, there’s no question. So it was very funny.

Anita Hollander: It’s very true in many cases; it’s been an asset for me on many levels, not always.

Anita Hollander: There are actual disabled roles that I was not cast in. I was auditioned for it and they went for a non-disabled actor for the role even though they had the authentic, accurate, person (actress) in the room. So it has not always worked in my favor but when it has, I call it an asset. I have always felt this way – that what makes me unique is an asset even if I don’t get other jobs. In fact, on my resume are far more roles that are not considered disabled at all. Blanche, in Brighton Beach Memoirs. Golde. Emma Goldman. All these roles that I’ve done, nobody ever considers them disabled. They weren’t disabled. If they’re historical roles, they weren’t disabled. Even in the stories or if it’s fictional roles – not disabled. 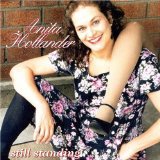 However, it doesn’t hurt to have a person in that role because it’s not specific, one way or the other. And I have a great artificial leg and I’ve tapped-danced in Nunsense and all of the Nunsense musicals. And been goofy and done choreography and really basically passed as a two-legged persons – as a non- disabled person.

Like in Damn Yankees,  playing Meg, the wife, the cast would often say to me, “We always forget that you have one leg because you zip on to that stage and zip back off again.”

Susan Dansby: Well, and I think that the other way that being in a minority becomes an asset is that you go in knowing, “Okay, there may be some odds against me here.”

Susan Dansby: Exactly, it puts you in such a head set that you know you have to be that much better in order to impress.

Anita Hollander: This is very true, Susan. That’s like probably the most valuable thing – that is so true. You many times have to prove to them that you are the better actor than the one that walked in who happened to have two legs.

Susan Dansby has received four Emmy® Awards and two Writers Guild Awards for her work on the soap opera, AS THE WORLD TURNS. She is the author of HOW DID YOU GET THAT JOB? MY DREAM JOBS AND HOW THEY CAME TRUE.
View all posts by Susan Dansby →
This entry was posted in Dream Jobs, Interviews, Theater Jobs and tagged actor, amputee, Anita Hollander, Cats, composer, director, dream job, get a job, get hired, How Did You Get That Job?, New York University, playwright, Susan Dansby, the Fifth Season. Bookmark the permalink.